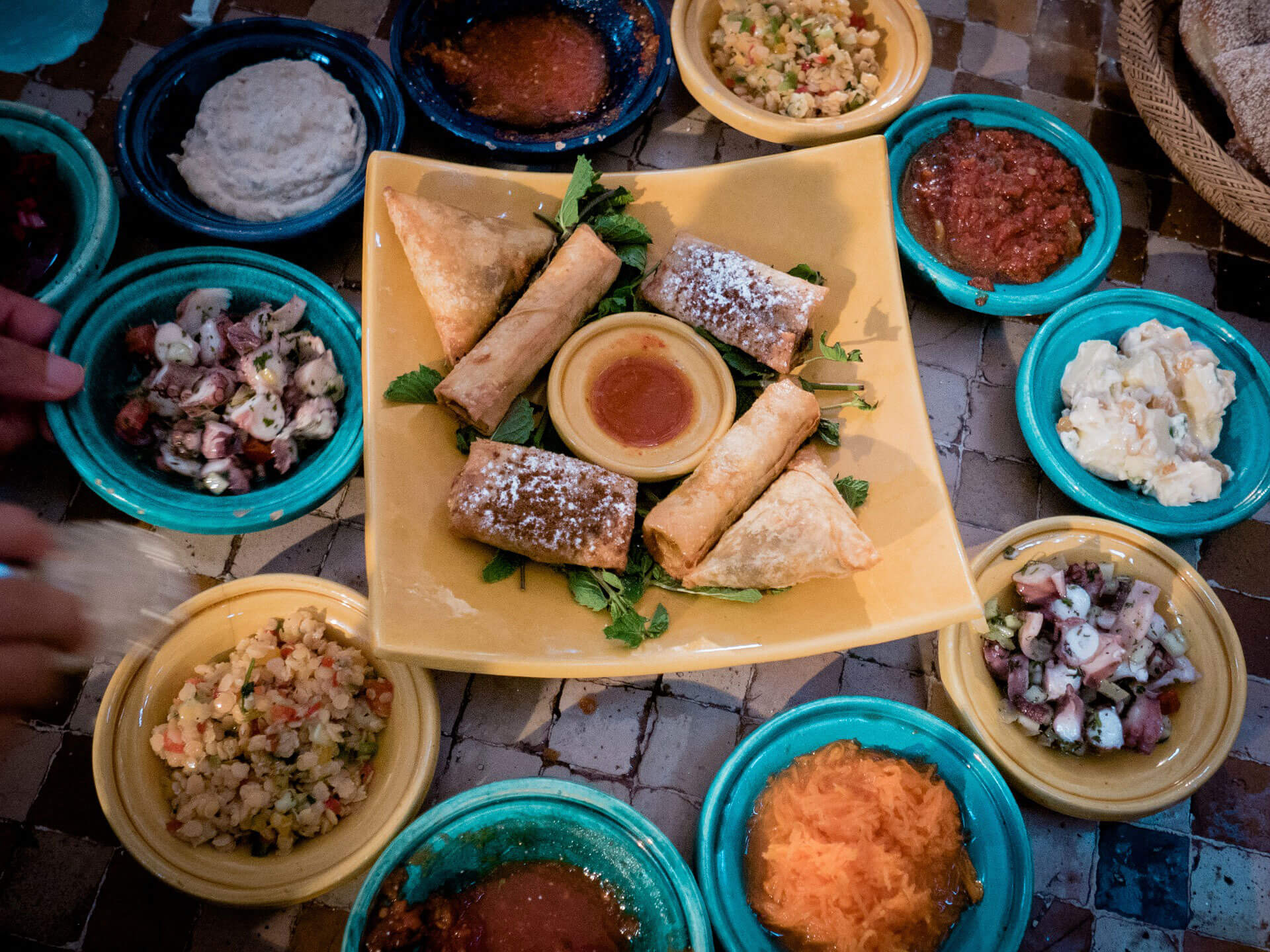 Arabic food is renowned for being an exotic and flavorful infusion of spices. The sheer mention of Arabic cuisine conjures up images of rich tagines, warm pita breads, and an array of hummuses and other mezes. With that considered, Arabic food is incredibly diverse and no two countries situated within the Middle East offer dishes that are the same. Riyadh is a culinary melting pot and with a plethora of dishes available to try, you will be certain to find plenty that steal your heart and your hunger.

You may experience culture shock in Riyadh and other parts of Saudi Arabia when it comes to dining out at restaurants. Restaurants in Saudi Arabia are typically gender separated and it is not permitted for women to dine with men who are not their husband or relative.

If you are lucky enough to be invited into someone’s home to eat, it is commonplace that you will be expected to wash your hands thoroughly before and after eating (that’s general manners though, right?). Since the traditional way of eating many Saudi dishes is to do so by hand, this may be necessary anyway. When eating by hand, you should eat with your right hand only, keeping your left out of view. As standard, Saudis will leave a small amount of food on their plate after the meal is finished, showing their host that enough food was given to fill them.

As a conservative Muslim country, Saudi Arabian food is prepared halal style. This means that there are specific ways in which the meat needs to be slaughtered and prepared before it can be eaten. Τhe consumption of pork is prohibited, as is alcohol.

Kabsa
If there was to be a national dish, then Kabsa would be it. This much adored rice dish is a popular choice and is regularly eaten at lunch and dinner times. Kabsa is made with rice, vegetables, a blend of Arabic spices and seasoned meat (commonly chicken or lamb). The traditional way of cooking the meat in preparation for the kabsa is to BBQ it in a hole in the ground – a practice common in several countries in the Middle East.

Roz Bukhari
You will encounter Roz Bukhari virtually everywhere in Saudi Arabia. Almost every restaurant and hotel will feature the dish on their menu and it is almost equal in popularity as Kabsa. Roz Bukhari originates from Afghanistan and is comprised of roast chicken served with rice. Each restaurant places their own unique twist on Roz Bukhari so no two dishes that you sample will be exactly the same. Common variations include serving the dish with a spicy tomato sauce, potatoes, or a fresh salad.

Arekah
Forget your coffee and croissant breakfast, the Saudi alternative is the Arekah. A Saudi Breakfast is served tapas style across numerous little plates and dishes. Common foods that are served include shakshuka (Arabic style scrambled eggs served with spicy tomato sauce), halwa, dhal, fresh pitas, and a variety of soft cheeses.

Muttabaq
Muttabaq is actually a Yemeni dish, however it is also immensely popular in Saudi Arabia and has been enjoyed in the country for decades. Muttabaq is served in various Middle Eastern countries and the dish consists of a pancake stuffed with a variety of different fillings. Muttabaq can be both sweet or savory and the fillings range from cheese (commonly goat’s cheese or ricotta to peanut butter and chocolate!)

Saleek
A dish that makes a regular appearance at Saudi dinner tables during the month of Ramadan, Saleek is cardamom infused chicken served with a side pairing of rice.

The Best Restaurants in Riyadh

As a nation that has been so isolated from the rest of the world, and relatively free from tourism until recently, you may be surprised to learn that Riyadh is home to many exquisite and high quality restaurants.

The Najd Village
If you are eager to experiment with Saudi Arabia’s colorful and exotic traditional dishes, there is no better place to do so than at The Najd Village. This lavishly decorated restaurant is one of the most popular in the country. Fulfil your Arabian nights fantasies by eating Saudi dishes and sipping mint tea will seated on cushions beneath an array of rich and colorful tapestries. The Najd Village offers a contemporary twist on ancient classics.

Set El Sham
Set El Sham is a more casual, buffet style Middle Eastern restaurant that is a regular haunt among locals. If Saudi Arabia is the only nation that you will be visiting on your Middle East trip, but you are open minded and interested about experimenting with as many foods as you can, then a visit to Set El Sham is your chance to do that. With foods from Egypt, Lebanon, Jordan and Yemen on the menu, you will not be short of things to choose from at Set El Sham.

The Globe
Towering high above the city of Riyadh and offering unparalleled views, The Globe is one of the most glamorous places to dine out in Saudi Arabia. During the weekends, the restaurant serves a traditional high tea, and if you are here as the sun goes down, you will bare witness to a majestic sunset over the Saudi Capital. The Globe serves both Arabic and European dishes, so if you find yourself missing Western flavors, you can find them here served to the highest quality.