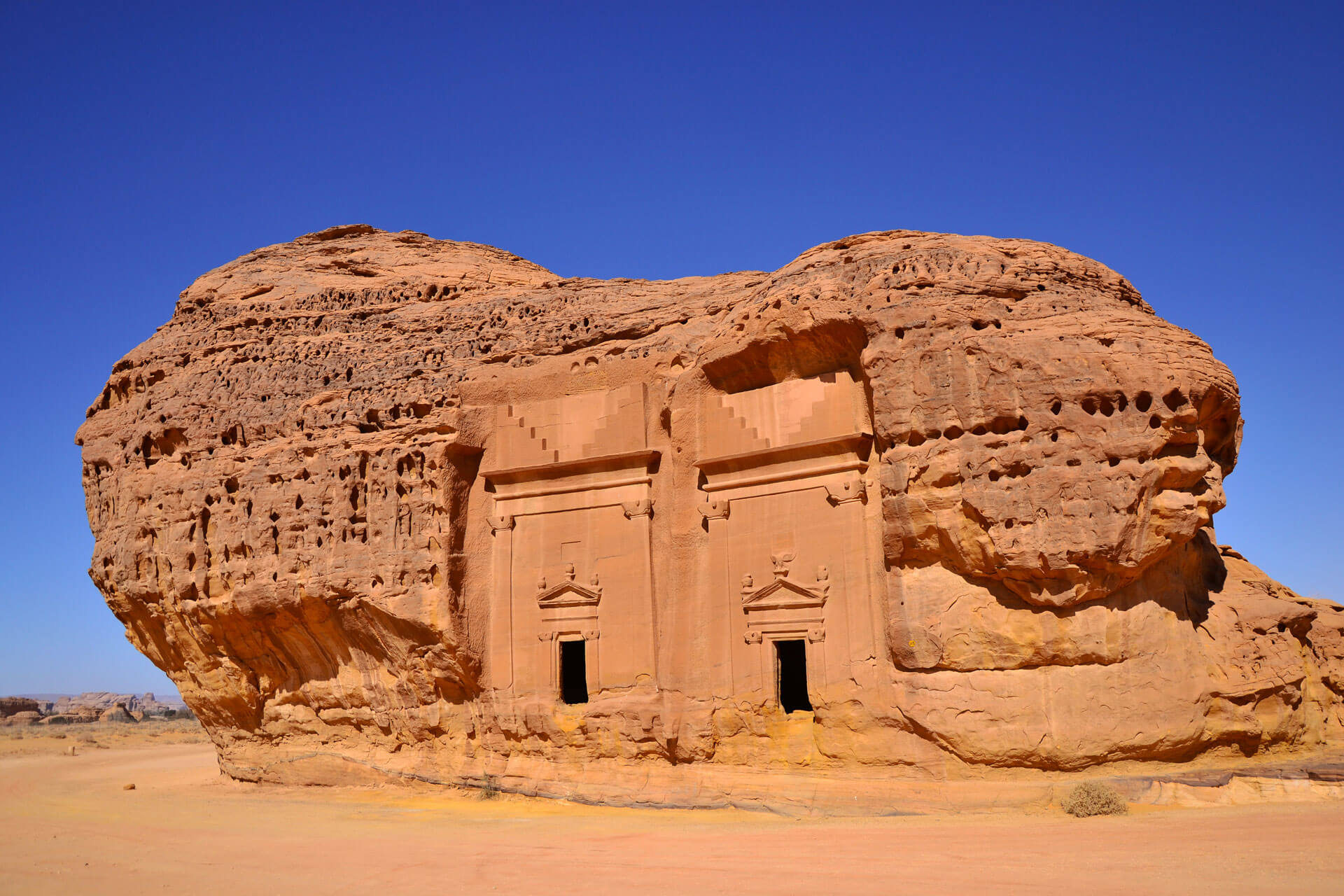 A mysterious nation that has been isolated from the rest of the world until recent months, Saudi Arabia is a country rich in history, culture and archaeological wonders that is certain to captivate the most intrepid world travelers. The beautiful thing about Saudi Arabia tourist attractions first hand is the fact that since international tourism is a relatively new concept here, you will often find yourself marveling at fascinating sites that are virtually free of tourist crowds, and for sure you will return home armed with tales of adventures that your friends and family can only dream about.

#1 Visit the City of Mada’in Saleh

The “lost” Nabatean city of Petra, carved into the rocks of the Jordanian desert is a destination that finds itself on the travel bucket list of many adventurers. Since Petra is one of the seven wonders of the world, its appeal is completely understandable. However what many people do not realize is that there is another, equally fascinating Nabatean city in Saudi Arabia. Mada’in Saleh was considered as the “second” city of the Nabateans and acted as a halfway point between Petra and Mecca.

Mada’in Saleh, like Petra, was conquered by the Romans but later fell into disuse after they abandoned it in favor of more strategic trade locations. Most of the buildings carved into the rocks here are tombs, and are incredibly well preserved.

#2 Explore the Ghost Town of Al’Ula

There is just something about abandoned sites and ghost towns that makes them so appealing. Al’Ula is the remains of an ancient settlement, situated in the Northern corners of the Saudi Arabian desert. The 2000 year old ghost town dates all the way back to the 6th century. The houses here, made of stone and mud brick, still stand, albeit decrepit and crumbling. The town holds religious significance since it is believed that the Prophet Mohammed passed through its winding alleyways on his return from battle.

Though Saudi Arabia is a Muslim nation, where Islamic law is largely intertwined with the culture and community, the country is also home to sites that would interest people from other faiths. Mount Horeb is rumored to be the place where Moses received the ten commandments. The precise location of Mount Horeb is an unknown, however since there are many characteristics at the Saudi mountain that match descriptions written in the bible, many people believe that this is the religious site. Unfortunately it is not possible to ascend the mountain since it is guarded by high fencing and Saudi military who conduct patrols around the area, however if you possess strong religious beliefs, you may be interested to travel to the base of Mount Horeb.

When traveling anywhere, one of the best experiences that you can have is to fully immerse yourself in the country’s culture and try to see first hand what life is like for the local people. In Saudi Arabia, one of the best ways to do that is to navigate your way through the winding labyrinths of Riyadh’s souks. Since Souq al Alawi is the largest in the country, it makes sense to head here. From colorful blends of spices, to Islamic artwork and rich tapestries and fabrics, Souq al Alawi offers a great opportunity to observe local life, or to pick up one of a kind souvenirs.

Saudi food, like many Arabic dishes, is rich in flavor and spice. The cuisine served here has a diverse background and many popular recipes originate from neighboring countries such as Egypt, Lebanon and Yemen. If you are extremely lucky, you may be invited into a Saudi home where you can guarantee that the food is of an authentic quality. Otherwise, the next best thing is to head into one of the restaurants that are much adored by locals. Najd Village in Riyadh is one such example. Be seated on plush cushions as you sip Arabic tea and eat Kabsa with the locals.

Adam and Eve are believed by many to be the first humans to ever grace this earth, and it is rumored that Eve’s tomb can be found here in Jeddah, Saudi Arabia. According to Muslim traditions, it is believed that Adam and Eve separated and Eve traveled to Jeddah so it makes sense that her tomb would be situated here. Signage on the outside of the tomb reads “Our mother Eve” and a number of travelers visit the spot every year. Sadly Eve’s tomb is somewhat deteriorated and decrepit since it was not well cared for in previous decades, however it could be an interesting place to tick off your bucket list nonetheless.

Tabuk castle, situated in the Saudi city of Tabuk, is arguably one of Saudi Arabia’s most popular tourist sites and dates all the way back to the 15th century. Tabuk Castle is a popular spot for Muslim travelers since the site features in the Quran. After being restored in the 1950s, Tabuk Castle is incredibly well preserved and the large grounds feature several points of interest – including an open mosque, a picturesque courtyard, and watch towers which were used for the castle’s defence.